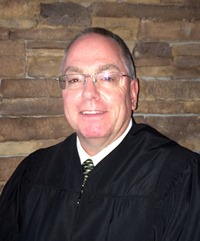 During his last term, he has presided over the following dockets: Juvenile Delinquency, Behavioral Health Treatment Court, Veterans’ Treatment Court, Mental Health, Criminal, and Juvenile Dependency and Neglect.  On the Judicial Performance Survey Report, Judge Alexander’s overall survey results were slightly higher than average –3.5 out of 4.0 – compared to the statewide average of 3.4.  Eighty-one percent of the attorney respondents concluded that Judge Alexander met performance standards.  In specific categories, Judge Alexander scored above average for his Fairness, Demeanor, Communications, and Case Management, scoring a 4.0, 3.7, 3.7, and 3.6 respectively.  In the categories of Application of the Law and Diligence, he scored 3.2 out of 4.0 in both areas, slightly below average.  Attorney and non-attorneys commented that Judge Alexander has a good judicial temperament, efficient case management, and treats participants with respect and dignity.  During courtroom observations, Commissioners observed that he is articulate, calm, and punctual.  He is willing to undertake new and challenging duties, such as Safe Baby Court.  He enjoys working with children and families.  His out-of-the-box thinking is well suited for treatment courts, where he can engage in collaborative and creative problem solving.  Judge Alexander sincerely cares about coming to the right outcome, although some attorneys reported that this might cause him to appear to be too active in directing proceedings toward a particular result.  He is always looking for ways to improve his performance on the bench, and recognizes there may be room for improvement on his decisions, since a survey four appellate judges rated him a 3.0 out of 4.0, compared to the statewide average of 3.6 out of 4.0.  Based on the Commission’s overall evaluation, Judge Alexander meets or exceeds performance standards.

The Commission conducted a personal interview with Judge Alexander and other community stakeholders, performed courtroom observations, and reviewed judicial opinions, a hearing transcript, and the 2020 Judicial Performance Survey Report.

Governor John Hickenlooper appointed Judge Alexander as a District Court Judge for the Tenth Judicial District on April 28, 2012.  Prior to his appointment, Judge Alexander served as Municipal Court Judge for the City of Pueblo, a Deputy State Public Defender, and a Magistrate.  Judge Alexander received his undergraduate degree from Columbia College in 1986 and his law degree from the University of Denver College of Law in 1990.  He is involved in community organizations, including serving on the board of the Colorado Lawyer Trust Account and conducts swearing-in ceremonies for local volunteer organizations.