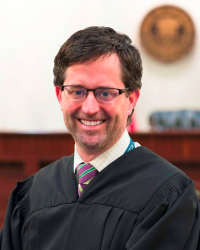 Judge Welling was appointed by Governor John Hickenlooper to the Colorado Court of Appeals on January 16, 2017.  Judge Welling earned a B.S. in chemical engineering from Colorado State University in 1995, an M.S. in environmental engineering from Pennsylvania State University in 2001, and a law degree from the University of Colorado in 2001.  He began his career as an associate at a private law firm. Judge Welling served in Colorado Governor Bill Ritter's Office of Legal Counsel from 2007 until 2011. He was appointed to the Colorado district court in the 17th Judicial District in 2011 and served there until his appointment to the Court of Appeals  As a district court judge, he had rotations in the areas of adult felony criminal law, juvenile law (including dependency, neglect, delinquency, and adoption), and domestic relations.  Judge Welling contributes to the judicial system by editing a practice manual for trial judges and chairing the Juvenile Rules Committee.  He has committed to becoming more active in serving the community.