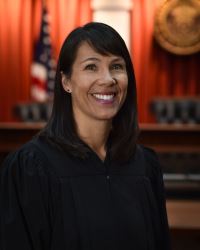 Judge Salomone currently is assigned to a family law division and has previously presided over civil and probate dockets.  Her written decisions are detailed and clear. As one attorney noted, “she’s a first-rate thinker, analyst, and writer.”  Her survey scores were generally positive, with particularly high ratings for demeanor, communication skills, and overall judicial attributes.  Since taking the bench, Judge Salomone has attended trainings and continuing legal education presentations to learn about areas of law with which she is not experienced.  She also participates in community service by judging high school mock trial competitions, teaching classes at the University of Colorado Law School, and serving on the bar association’s Professionalism Committee.

The Performance Commission interviewed Judge Salomone, observed her in court or listened to recordings of her court, read some of her written opinions, solicited and received comments from the Boulder District Attorney and the co-chairs of the Boulder Criminal Defense Bar, and reviewed performance survey responses from attorneys and non-attorneys who had been in her courtroom.  Among the survey questions was “based on your responses to the previous questions related to the performance evaluation criteria, do you believe Judge Salomone meets judicial performance standards?”  Of the thirty-nine attorneys who responded to the survey, 88 percent of the responding attorneys said yes, six percent said no, and six percent had no opinion.  Of the two non-attorneys responding to the survey, 100 percent said that Judge Salomone meets performance standards.  Overall, Judge Salomone is a compassionate and insightful judge who is enthusiastic and highly engaged in her job.

Judge Salomone was appointed to the Boulder District Court in October 2017.  Prior to her appointment, she was a partner in the law firm of Malkinson Salomone, LLC, a criminal defense firm.  Prior to entering private practice, she served as a deputy public defender in Denver.  Judge Salomone earned her undergraduate degree from UCLA, and her law degree from the University of Michigan Law School.