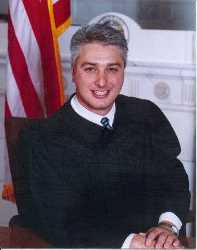 Judge Kopcow presides over civil, domestic relations, probate and criminal matters in Greeley, Weld County, Colorado. Judge Kopcow’s demeanor is described as being respectful, dignified, compassionate, and impartial.  Judge Kopcow is culturally sensitive to all persons entering the courtroom.  Judge Kopcow consistently makes certain that everyone leaving the courtroom understands what was communicated and the court’s decisions and rulings.  Judge Kopcow brings clarity and answers to confusing and often emotional and difficult issues.  Judge Kopcow’s decisions are prompt, clear, concise and well-written and allows the reader to clearly understand the findings of facts, the issues presented, the holding of the court, and the analysis/application of the law.

Commission members observed these qualities during their evaluations and interview through the challenge of WebEx due to COVID-19.  During this time, Judge Kopcow was very organized and conducted the courtroom with complete control and efficiency.  The Commission read Judge Kopcow’s opinions as well.  The Commission also reviewed judicial performance survey responses from attorneys and non-attorneys who had interaction in Judge Kopcow’s court. Among the survey questions was “based on your responses to the previous questions related to the performance evaluation criteria, do you think Judge Kopcow meets judicial performance standards?”  Of the attorneys responding to the survey, 82% answered yes; 13% answered no; and 4% had no opinion.  Of the non-attorneys responding, 100% (a total of two responses) answered yes.  Based on all findings, the Commission unanimously agreed that Judge Marcelo Kopcow MEETS PERFORMANCE STANDARDS.

Judge Marcelo A. Kopcow was appointed District Court Judge on July 1, 2005.  Previously he served as a County Court Judge from January 1, 2004 through June 30, 2005 and the Presiding Greeley Municipal Court Judge from May 13, 2002 through December 31, 2003.  Judge Kopcow served as a Deputy District Attorney from 1994 through 2002.  Judge Kopcow graduated from Northeastern University-College of Criminal Justice receiving a Bachelor of Science and Master of Science Degrees and received his Juris Doctorate degree from New York Law School.  Judge Kopcow is Chair of the State of Colorado Sex Offender Management Board and member of the Colorado Supreme Court Advisory Committee on the Rules of Evidence.